My good friend prompted me to write about thoughts and feelings I had had whilst walking 100km. 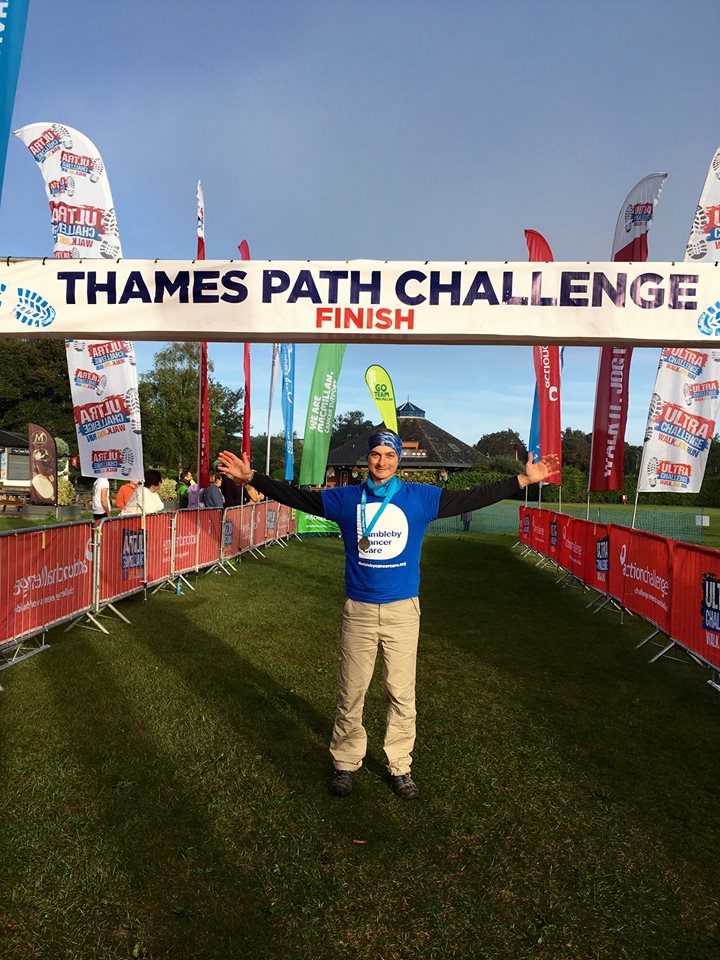 Well, it all started with excitement of an adventure, of hopes to do something I’d never done (despite my love of hiking and walking), of extra motivation brought by my past illness and your support. I had a fear of failure too and thought what distance would not look too bad. Somehow I did not think about physical aspects of failure, more about psychological ones.

I could not sleep the night before despite having gone to bed at 8pm, I was too excited as one is before their birthday or an important exam. So I woke up at 5.30am before the alarm. I had a proper breakfast to make sure I don’t have to carry much food on my shoulders.

Overall, the weight of my rucksack was one of my primary concerns, as after the operations on my neck, my left shoulder tires easily. With this in mind I repacked everything in the morning and split my stuff between two bags: a Buddhist monk sack and a small rucksack. They had promised heavy rains, so I had to take more clothes and rainproof gear. I was not too concerned about my footwear, as both pairs were my favourite and proven: one pair of textile Keds had served me well in the Himalayas, the other pair of the Vegetarian Shoes summer hiking sandals had proven itself in hikes around the UK.

By 6.40am I was at the starting point in Putney, London, and felt slightly awkward having nothing to do (I had pre-registered earlier in the week) and watching others arriving as couples or small teams, jolly chatting and laughing. There were songs like ‘We’re the champions’ broadcasted and every 20min another group of participants was departing. The showman on the stage was inviting everyone for a group warm-up and stretching – something I don’t feel comfortable with (I hate group exercises), however I joined in the hope to engage and boost my morale.

At 7.20am my group was given a signal to move and so we walked out of the park and across the Putney bridge, turned onto the embankment and proceeded towards Richmond. At that point I hoped to strike conversation with someone as this is a known way to pass the time, but suddenly I noticed that one by one everyone placed headphones in their ears and started looking under their feet.

Somehow I was in no mood to do the same so I decided to concentrate on observing the city wake up. It was fun and interesting as I had not known much about that part of London, so I kept up with high pace of 6km per hour and yet managed to enjoy the scenery. In 14km and slightly over than two hours I arrived in Richmond. I cannot register any single thought I had at that time, I just remember excitement and joy that I was doing it and doing it well and calculated that with this speed I’d be back in London by breakfast on Sunday. So I started planning my day accordingly. I even thought of posting something on Facebook inviting people for a Sunday lunch somewhere in a pub.

When I left Richmond, however, I noticed something what I had not paid much attention to before: that my pair of vegetarian sandals was full of gravel, the left foot hurt particularly badly. With a few shakes and moves most gravels would be out of my sandals, but within minutes they would fill again. My pace remained the same though and some sharp but mild pain down on my feet was masochistically pleasant and somehow brought to me thinking about Jesus and pilgrimages. That was fun to think about and experience (as I then reflected) and so the next 14km to Kingston went almost unnoticed too.

When I arrived at Kingston I decided to have a 20min rest and change my shoes to textile Keds in the hope to stop gravel getting close to my skin. So I sat myself down and started taking my left sandal off. It painful to do, but more painful to look at. I had some plasters though, so I used them all, changed my shoes and thought that the problem was solved. How wrong I was…

By that time heavy rain started and it made paths slippery and slowed me (as everyone else) down. This slowing also made me concentrate more on the physical aspects of the walk and for the first time the thought that I may not compete the challenge crossed my mind. I tried not to think about it and switched to wording a funny post on Facebook for the last attempt of fundraising for Dimbleby Cancer Care. Somehow it kept my mind occupied for a good hour or so and thus I reached the next stop point.

36 to 50km were full of remorse about not having thought about my footwear properly. I also recalled, that other had mentioned taking painkillers. The thought of not finishing the walk was now constant in my mind. I just tried to figure out how to say it to all of you and apologise and then may be walk for slightly over than 50km so that it looked better. My morale was down completely.

At 47.5km I noticed a slightly overweight lady wobbling and I rushed (well rush-crawled) to keep her standing, then brought her to a bench. I knew I needed to call the emergency service, but I was slow and undetermined, so I could only ask her some questions, stop her from moving and hold her hand. Three ladies came to us and one other thankfully took charge and managed to coordinate us to call the ambulance and make other arrangements. I stayed there for 40min. Wasted time for me? Well, most probably not as something shifted in my mind and my feet – I reckon – had some rest, though I did not sit down for a minute. 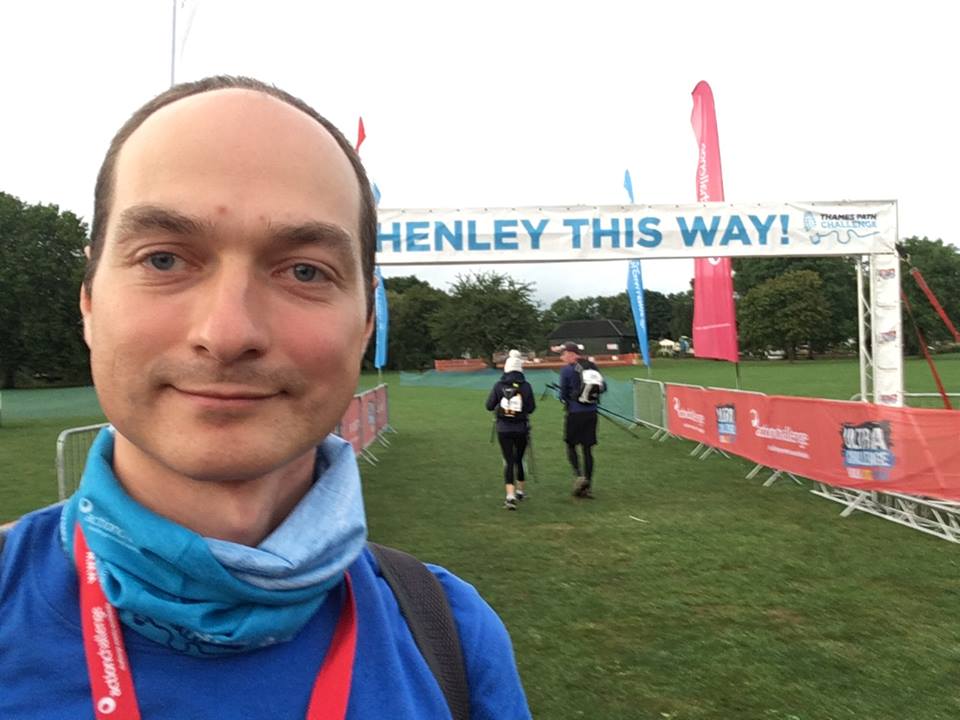 At a 50km mark point I stayed for 1.5hr having dinner and then attending the medical tent, where an ex-mariner carefully and thoroughly bandaged my feet. Seeing him, reflecting on what military men endure when on service made a change to my mood and I left the point full of anticipation to walk at least two thirds of the route. I also took two pills of ibuprofen.

It was getting darker, but the rain stopped. Most people had left by now as they had been walking 25 and 50km only. They had collected their t-shirts and medals and joined their friends and relatives who probably took them for celebratory dinner.

The next 14km (which according to the website I walked at a pace of 3.15km per hour) I was trying to get back to positive mood if not excitement of the challenge. I was recalling hikes at different periods of my life, then recollections of various people, some of whom had passed away, came to my mind, all small moments and encounters, their words and gestures, the situations we had been. 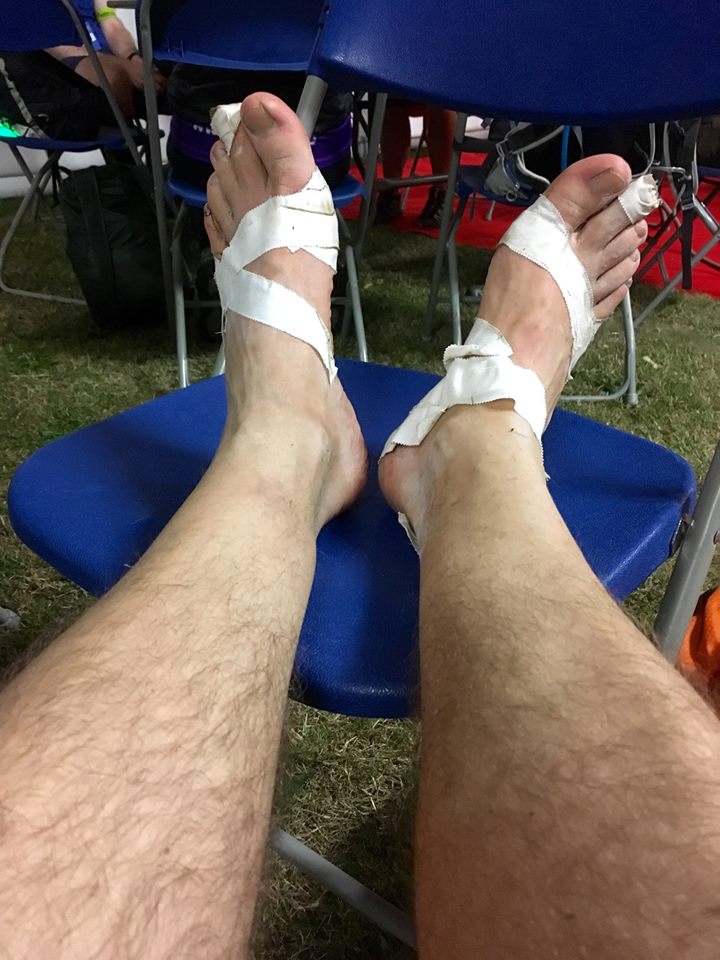 At 77km I attended medics once again and they laid some more layers of bondage. By then the painkiller probably started working and so I walked relatively easily. It was a deep night, cloudy and misty, so the hand torch could barely help but by then I did not really care about where I step – be it mud, grass or cow poo.

I started a conversation with a young pretty (mind it – it was around 2am) female football player and we talked about life in Norfolk, differences between girls’ and ladies’ footballs and so we walked until we bumped into someone lying on the ground in the path and wrapped in the foil emergency blanket. The gentleman told us that he had been walking, then fell and could not get up, so the only thing he had every to do was to put a blanket upon himself. 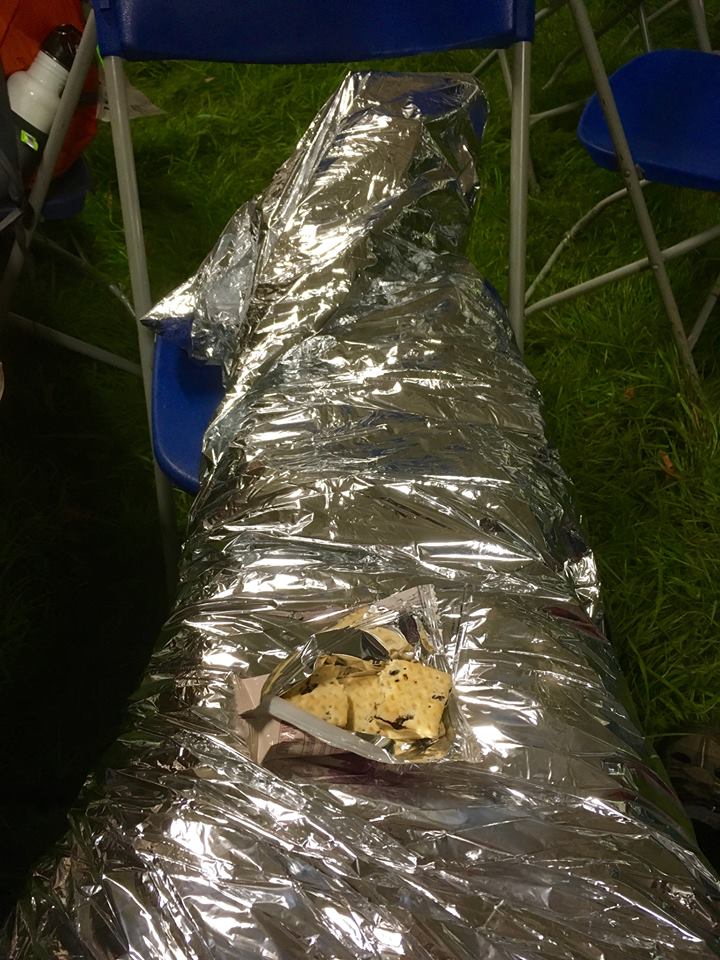 We put glowing sticks all around him so that other could see the obstacle clearly and called the ambulance. Unfortunately, it took them long to get to the casualty – as they kept calling Rich: the path was slippery, no access for the car for almost two km and they required four trained men (my most favourite health and safety rules again!) to carry the casualty (they indeed repeated it almost in every sentence) to the ambulance car.

The lady I was walking then told me she had tried the Challenge the year before and had to withdraw at 74km, so we cheerfully celebrated that on this occasion she passed the mark. After the rest stop I’ve never seen her again, but I hope she managed to finish this time round. She was very determined.

At 85km I had my last stop before the finish. Having checked time on my watch I was pleased to notice that I’d got back to my 6km per hour pace in the past two hours. Did I dream it or overhear someone on the path commenting: ‘This guy is on drugs…’ Whatever.

It suddenly and unexpectedly changed after I got up from the chair to move to the final stage of the walk. I had no energy, my feet weren’t reacting. There was a small group of struggling men walking in support of the Help for Heroes, so I asked permission to join them and so we were walking slowly slowly with almost no words said until the dawn, when mist gave place to sun and the woods opened up onto enormous private valley.

So in the open and with more people around us (dog-walkers, joggers and paddlers) we walked our last five kilometres to Henley, seeing every kilometre mark as a God-sent sign that we are on the right track.

Finish. Medal. T-shirt. Photo. Hot meal voucher. More bandage on my feet. Slow breakfast of jacket potato with beans and cheese, banana, apple and green tea. Lonely crawl through the car park and hidden short-cut passage to the railway station to stay in the long queue of medalled injured sleepy but humorous people waiting to get their over-priced train tickets from the only working self-service machine.

Train. One minute nap. Paddington. Cab. Home. Hot bath with salt, peppermint and sodium. Bandages removed with respect and pieces of skin, pillows placed at both ends of my bed to rest my head and feet on them. Nirvana reached. Sleep on and off for the next three days. Walking out of home for the first time on Wednesday. Cycling being more preferable than walking for the next two weeks for sure. Donations coming in.